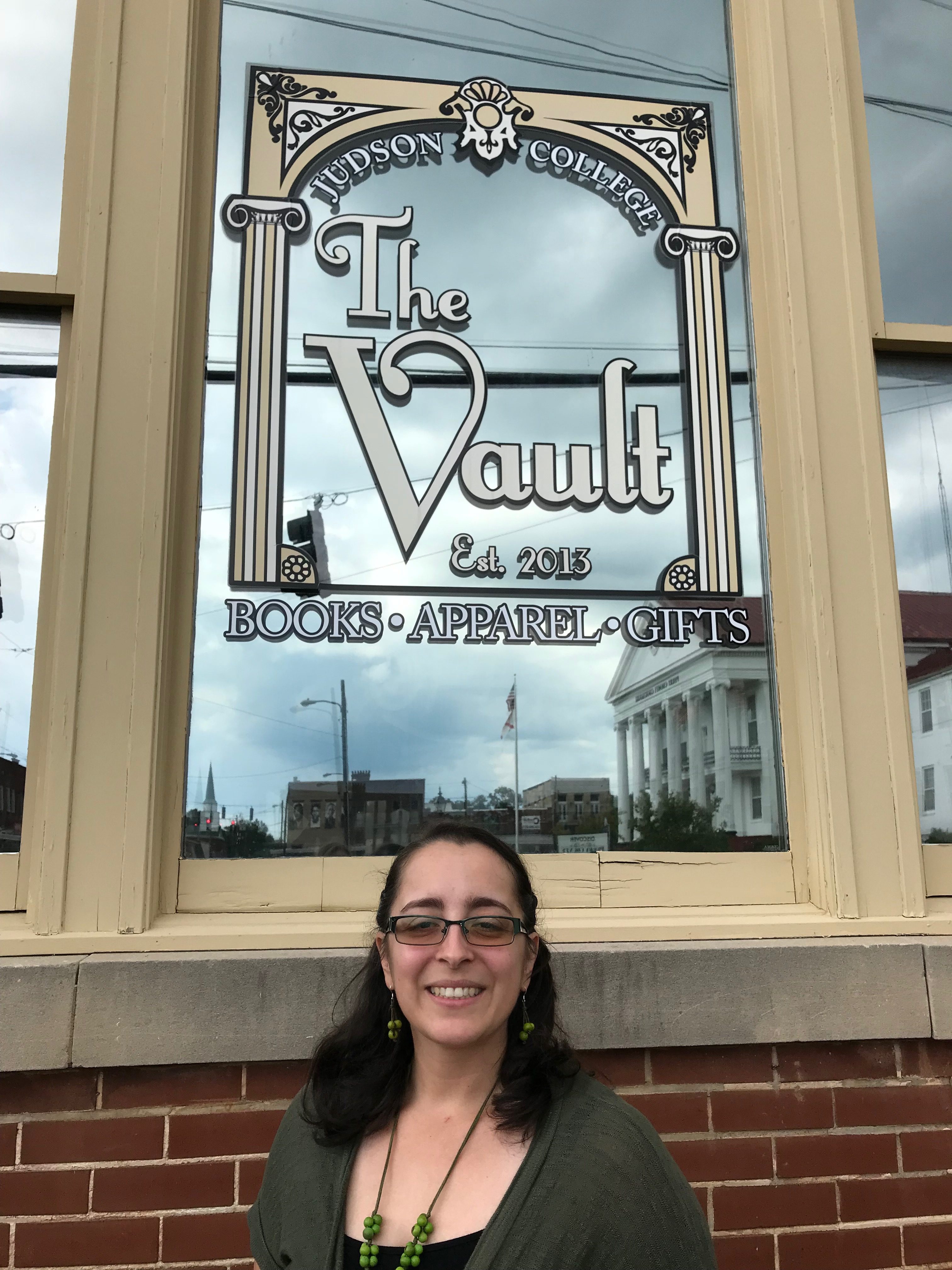 Jean O’Connor-Snyder intern Katie Eaves reflects on one of Marion’s active new citizens in her final thought piece from Marion.

Margarita Quinchia-Rios McConnell, more commonly known as Maggie, is the manager at The Vault in downtown Marion. The

journey to this spot in the heart of Marion began far away in her native Colombia.

The Vault, a unique college book store housed in a former bank, opened in 2013. Maggie began working for Judson College as a part-time graphic designer before she became the manager of The Vault in June 2016.

In 2013, the then-president of Judson Dr. David Potts wanted to invest in the downtown area to strengthen the relationship between the college and its surrounding community, so he decided to move The Vault off Judson’s campus into a store space on the square in Downtown Marion. This store carries books for both academic and leisure purposes, apparel, décor, and jewelry.

When visiting The Vault, one can view the three distinctly different bank vaults reflecting various times in history. The oldest vault is where Maggie drew inspiration for the store’s logo. The second vault, closer to the front of the store, dates back to the early 1900s. The third and newest vault is the most modern with clean links and an industrial look.

Maggie is originally from Medellin, Colombia, where she studied graphic design at the Institute of Art. Her journey to Marion began when she moved to Madison, Wisconsin, to join her sister who was working on her Ph.D. That’s where she met her future husband Kristopher McConnell.

As Dr. Kristopher McConnell’s post-doctoral experience was wrapping up in Bloomington, Indiana, he and Maggie began

looking for smaller towns to settle in. After Dr. McConnell’s interview with Judson College, Maggie said she was certain that Marion was right for them. Dr. McConnell is now an associate professor and the head of the biology department for Judson.

Maggie and her husband of 11 years try to keep their two daughters, Annabelle Rose, 4, and Victoria Elizabeth, 8, involved with extracurricular activities as often as possible, but they do find it challenging to do so in a small town like Marion.

Facing this challenge, Maggie said she decided “instead of criticizing, I can try to do something to make it better.”

She and her husband now coach baseball and soccer and are involved with the local Girl Scouts. She sees a lot of potential in the future of Marion and its people. “It’s great to have a small town where people know each other and that comes a little bit closer to my background.” She said both she and her husband grew up in small towns like Marion and they both value small-town life.

Today, the Vault manager said she views being involved in her community as necessary and rewarding. In addition to supporting the area’s extracurricular activities, she serves as the vice president of the Main Street Marion Board as well as the co-chair of their design committee.

She uses her desire and actions to make Marion a better place to show her daughters why civic engagement is important. She said, “To be able to have a better world—to be able to have the things you want for your family—you got to get involved.”

Even with all her civic activities, Maggie finds time to have fun. She recently started selling her unique homemade salsa at

community events. “That’s my spare time. I love to cook.” She sold jars of her Colombian, tomato-free salsa at the Jazz on the Square event this past April, and it was a huge hit.

Maggie and her family are now firmly rooted in Marion, especially after December 1, 2017. That’s when, after paying all the dues and waiting for many years, she became a newly minted U.S. citizen. “I just voted for my first time ever this past June. So, I was very excited about that.”

On the topic of immigration, Maggie said she wishes more people would learn about the process, so they could better understand what it’s like for people going through it. “What we can do is just be vocal and advocates.”

She plans to continue to share her culture even beyond her delicious salsa. After teaching Spanish to juniors and seniors for two years at Marion Academy earlier in her career, Maggie has now identified a new way to help her community.

She plans on teaching the Spanish language to others. Maggie plans to begin teaching Spanish to young children and their parents later this year, adding that she knows learning a second language is easier when the student is younger. The mayor has already approached her asking if he and his child can sign up.

When asked what her favorite part of her American life in Marion, Maggie said, “It’s people, absolutely! Everyone’s just so willing to help. There’s so much potential. I think that’s what keeps us here and keeps us happy.”