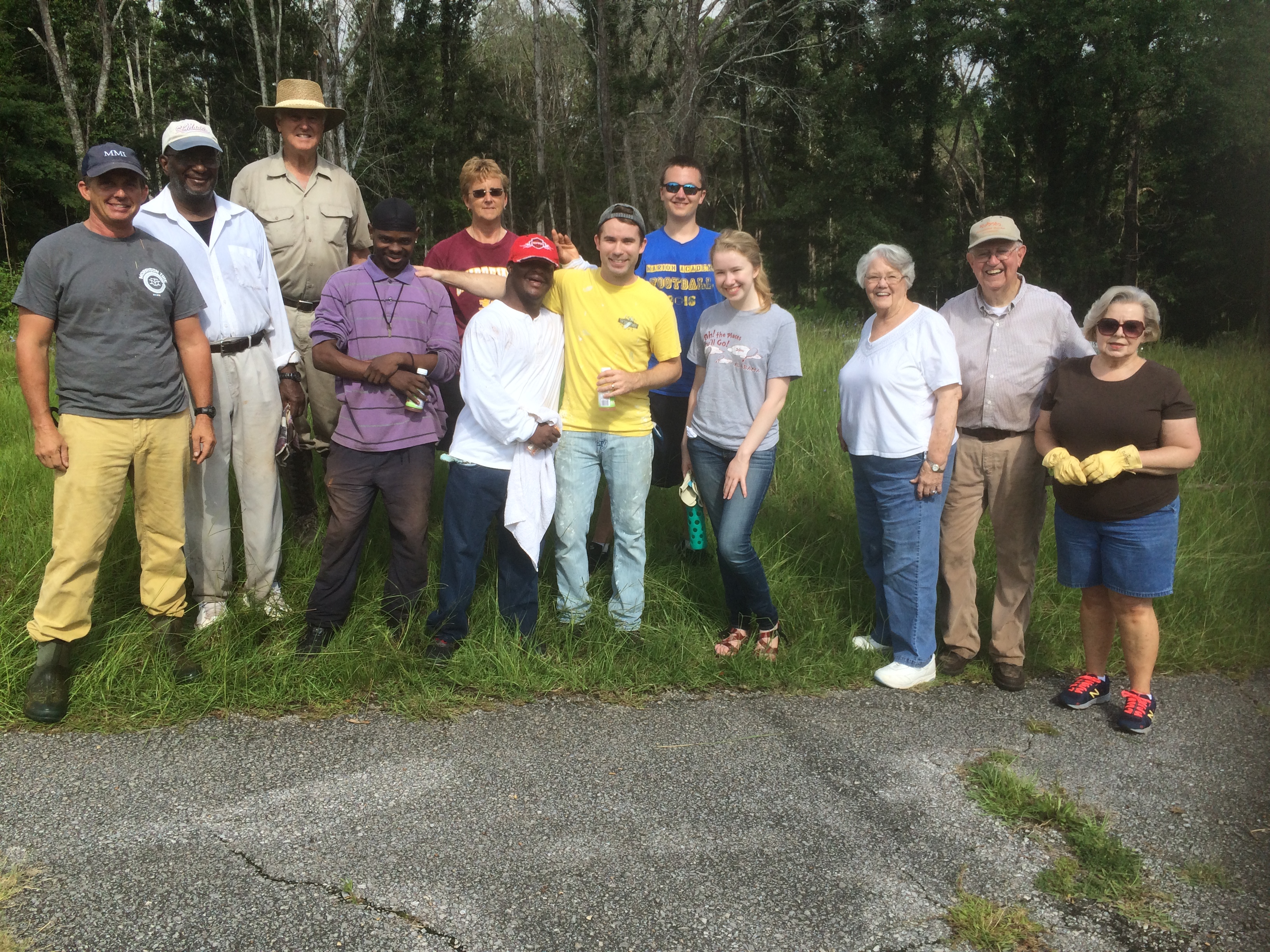 JOIP intern Katherine Mauldin reflects on how residents of Marion collaborate to preserve their past. Part of a series of thought pieces from our interns embedded in communities across Alabama.

When Theresa King-Anderson, community organizer and semi-professional jam maker, put out a call for volunteers on social media she encouraged both the young and old to show up at the Marion Cemetery early on a summer Saturday morning with “gloves, bug spray, clippers, and rakes.” She explained her call to action simply, noting, “Those interred there deserve a beautiful place to rest.”

And 20 local volunteers did show up on Saturday, June 17, equipped and ready to clean up the historic and sacred site in the heart of Marion across from Judson College’s athletic facilities.

The Marion Cemetery Association board members were awake and alert before 7 a.m. eager to direct the work of cleaning in all quadrants of the cemetery. This volunteer effort sought not only to help maintain the grounds so the cemetery can be mowed and weeded regularly but also to raise awareness of the history of this community.

“If your family ancestors were here, wouldn’t you want it to look nice?”

Many of the stories of the people laid to rest at the Marion Cemetery were passed from generation to generation. One such story is about one its more famous residents, Harry. Most Marion residents know the story of Harry, the slave who gave his life to save students of Howard College during an 1854 fire.

In addition to Harry’s grave, a memorial dedicated by representatives from Howard College, Judson College, and the Alabama Baptist Convention stands tall in the Marion Cemetery. This monument, set aside from other graves, rises from a sea of ground level markers on the main pathway. Harry’s story is etched in marble and notes that he “illustrated the character of a Christian servant, faithful unto death.”

Marion Cemetery is also home to Idella Childs, a woman who spent her life preserving access to quality African American education in the Black Belt. In Perry County, that education was provided at the Lincoln Normal School, founded in 1867 by freed slaves. This institution produced leading civil rights activists, lawyers, doctors, and educators.

Childs was an honorary member on the National Commission for the International Year of the Child appointed by President Jimmy Carter. She was inducted into the Alabama Women’s Hall of Fame as was the first African American woman to serve on the Marion City Council.

During the June clean-up effort, Inez Barnett, chair of the Marion Cemetery Association Inc. board, spoke about the historical importance of the cemetery and the previous efforts of the group. She noted, “The oldest grave we found is from 1817.”

Local expert John Anderson’s childhood centered around Marion Cemetery.  His father served as an undertaker at a local funeral home and was in a monument business. Anderson grew up hearing the stories behind many of the founders of Marion laid to rest here. He loves to share the tales of his childhood with interested visitors.

The beautiful space is a result of sustained community support over many decades. Descendants of Marion Cemetery residents travel from near and far to care for the resting places of their family members and family friends.

In the 1960’s, a garden club in Marion started a five-year project to refurbish the cemetery. This included resetting all of the tomb stones, cleaning the monuments, and conducting repairs of broken fences or stones. Anderson worked with his father and other family members to provide the manual labor necessary for the completion of this project.

The “Friday Faithful” was a group of such citizens who spent every Friday morning in the first years after the creation of the Marion Cemetery Association weed eating and maintaining tombstones. Although this group no longer congregates, volunteer efforts like this summer’s event brought new and young faces to help maintain the cherished space.

“Those interred there deserve a beautiful place to rest.”

Community support continues due to the efforts of the Marion Cemetery Association Inc. “The major portion of the work done in the cemetery recently was done three years ago. The first big community work day we had 80 people show up to help,” Roy Barnett, Marion Cemetery Association board member, said. He added, “The second work day we had around 35 people show up. Nine different churches in Marion use this cemetery.”

Some members of those churches participated in the June clean-up. Marion resident Andrew West from Berean Baptist Church showed up with tools in hand.  Josh Watford, youth minister of Siloam Baptist, joined in as well.

Watford has volunteered on previous cemetery workdays with students from his youth group and visiting church mission teams. Watford remembered one workday volunteers uncovered and documented more than 150 graves. Some of the recently discovered graves were those of slaves and include the slaves’ assigned numbers on the tombstone.

The Marion Cemetery Association plays a key role in organizing citizens of Marion to care for its past. The motivation is simple for Anderson-King, who said, “If your family ancestors were here, wouldn’t you want it to look nice?”

For these volunteers, caring for the sacred spaces of a community unifies citizens through hard work and reverence.