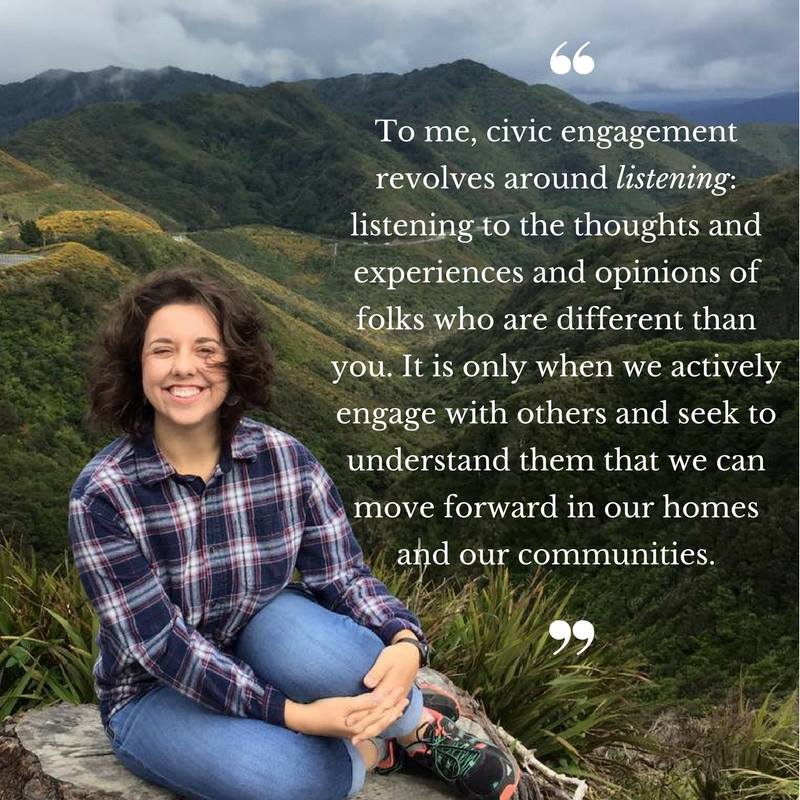 2016-17 JOIP intern Anastasiya Titarenko reflects on newcomers to rural Alabama, and those working to make it feel like home, whom she met during her internship in Walker County.

Communities are rich and interesting because of the differences and complexities that exist within them. A growing part of the Walker County is its Latinx* community. Over the last several years, Walker County has seen an increase in community members from Guatemala, El Salvador, Mexico, and other Latin American countries, with a total population of 1,493 Hispanic or Latino-identifying individuals, according to the 2015 U.S. Census Bureau.

“You have to meet them where they are and bring them forward.” – Ginny Roberts

Some in Walker County are working to make it feel like home for newcomers. Every immigrant experience is unique, and moving to a new home is always challenging. One sacred place where some of the Latinx community in Walker County can find familiarity is St. Cecilia Catholic Church.

St. Cecilia, on Alabama Highway 195, was built in 1999. A weekly Spanish Mass started in 2000. The current priest, Father Joe Lody, is fluent in Spanish and many other languages, making him a great fit for St. Cecilia.

Father Lody said he believes the church provides what feels familiar. “At the very least, it’s the same Mass. People come to church because it feels like coming home.”

Another member of the Jasper community who works closely with the immigrant population is lifelong educator Ginny Roberts. Roberts taught high school for almost two decades before transitioning to teach English as a Second Language in Jasper City Public Schools. “It’s what I was meant to do,” she said.

School is an integral place for immigrant children to feel at home in a new place. According to Roberts, the Jasper City Schools do a tremendous job of integrating, teaching, and loving their English language learners, who come with a great motivation to learn.

“You have to meet them where they are and bring them forward,” Roberts said as she explained her teaching philosophy. In addition to creating a positive learning environment for students, Roberts added that many teachers chip in to help families in need at their school.

Diversity Within the Latinx Community

During his four years in Jasper, Father Lody said he has learned a lot about the Latinx community. He pointed out that there is a tendency to group the community into one category, when in reality it is ethnically, religiously, and linguistically diverse.

Much of the Latinx community in Jasper is from Guatemala, a culturally and linguistically rich country. According to Father Lody and Roberts, many of the Guatemalan immigrants in Walker County speak K’iche, a Mayan language of Guatemala.

Miriam Argetta, a native of Guatemala and a K’iche and Spanish speaker, moved to Jasper when she was a teenager in 1981. Over the last few decades, she has seen the Latinx community expand across the state and county.

For several years, Argetta has worked as an interpreter for the Walker County Health Department. “At the Health Department, on a daily basis, I am speaking three languages.” She said she feels lucky to be able to use K’iche every day. “I never thought that I would use my Mayan language in the United States.”

Argetta also serves as an interpreter for other agencies and organizations, including the judicial system. The high demand for her interpretation service is a testament to the increasing diversity of Walker County and the steps organizations are taking to ensure services are inclusive.

Immigrants may face many challenges when moving to Walker County. Roberts has witnessed families overcoming obstacles such as access to healthcare, childcare, and employment. Lane Reno, a long-time advocate for the Latinx community in the county, has built relationships with many immigrants in the Jasper area. She said that many of these challenges are exacerbated by language barriers.

Fear can be another factor, Reno said. She recalled the reaction that came with the passage of Alabama’s House Bill 56. Passed in 2011, one part of HB 56 allowed police in Alabama to make an attempt to determine a person’s legal status if there was “reasonable suspicion” they are in the United States illegally.

While the courts struck down many sections of HB 56 in 2013, remnants of the bill remain part of state law. Those remnants continue to be enforced, creating uncertainty for immigrants.

This continues to feed feelings of fear, even for those who have Visas and green cards.

Father Lody runs into legal roadblocks at St. Cecilia, particularly when seeking to marry those without U.S. citizenship. He recalled stories of sending couples to different courthouses in several counties to obtain a marriage certificate. “Marriage is always a big issue,” he said. “It’s about life — about your life together. It has to do with way more than politics.”

“People come to church because it feels like coming home.”

In terms of educational access, Argetta said she believes that adult education is key to providing resources and integrating immigrants into the community. Through her upbringing in Guatemala and her work at the Health Department, she has learned that many Guatemalans of Mayan descent face literacy problems because of educational barriers in Guatemala.

She added that teaching English in an effective and accessible way can change things tremendously. “Once you learn to read and write, a lot of things change. Doors open. Mentalities open.”

*Latinx is an alternative to Latino or Latina that is inclusive of both and other genders.