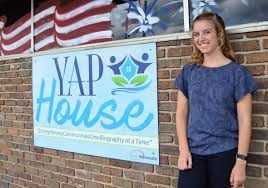 Carl A. Elliott served eight consecutive terms in Congress and was the first-ever recipient of the John F. Kennedy Profile in Courage Award.  A long-time Jasper resident, Elliott was an extraordinary individual who lived a long, productive and life centered around public service to Alabama and its citizens. Civic service was not only a defining priority in his life, but a value that Elliott inspired many to value themselves. Consequently, Elliott’s legacy lives on in many who call Jasper home fifty years after he left Congress. But this summer, when efforts to preserve Elliott’s Jasper home and the museum it houses struggled to come together, I began to look into what it might take to bring this idea to fruition.

Before Elliott called Jasper home, he lived in a rural Franklin County, Alabama. He spent the majority of his life in rural areas of the State, ultimately graduating from Vina High School. But when he graduated, the United States was in the midst of the Great Depression. Between this economic reality and his own background of rural poverty, Elliott struggled to afford college. However, he worked his way through the University of Alabama, where he not only graduated college, but went on to earn his law degree as well. After law school in Tuscaloosa, Elliott returned home to Franklin County to begin his law practice in Russellville, the county seat.

Shortly after beginning his legal career, Elliott relocated his professional and personal life to Jasper. Elliott would call Jasper home for the rest of his life, including his many dedicated years of public service to Alabama and the United States. Before Elliott ran for Congress, he built a successful career in Jasper focused on representing impoverished coal miners and their families. Elliott’s work on behalf of the less fortunate foretold efforts he would spearhead to advocate for some of Alabama’s most disadvantaged residents while in Congress.

Elliott continued his emphasis and passion for public service through serving in the United States Army from 1942 to 1944. Shortly after, Elliott ran for Congress in 1948 and won. In Congress, Elliott’s service took many different forms. But one particular success was his spearheading of literacy initiatives in the state of Alabama. Elliott even authored the Library Services Act, providing many libraries for rural areas of the United States, and bringing bookmobiles to rural Alabama communities.

Like many members of Congress, Elliott bought a home in Washington, D.C. However, during his sixteen-year tenure, Elliott continued to return to the modest home he shared with his wife in downtown Jasper. Elliott’s extraordinary success story and legacy of engagement  have inspired many. And his home, no doubt, is valued by the community. But difficulties restoring and preserving the home, which has fallen into disrepair, have sparked a sometimes contentious community-wide conversation about the intrinsic value of the home of such an extraordinary citizen.

Carl Elliott was dedicated to the citizens he represented in Alabama’s 7th congressional district. Consequently, some community members believe the same dedication to should be showed in preserving Elliott’s legacy in Jasper. But the current owner, Bevill State Community College, is struggling to maintain the house and museum.

And as it falls into disrepair, it’s hard to square Elliott’s legacy with the physical appearance of the house. In late June, Bevill State held a meeting about desperate need to preserve and restore the Elliott home. Different ideas were raised for possible contributors to the homes work and restoration, but many realized that large financial contributions would be needed to make substantial progress. This meeting inspired not only discussion about who should take the bulk of the financial responsibility for the home, but also about what that allocation of resources means for the Jasper community.

Considering Carl A. Elliott’s legacy, many of Jasper’s citizens have big hopes for the preservation of his home. Some citizens even hope the restored Elliott house could be a tourism attraction. These topics of tourism, preservation, and historical importance of the Elliott home, guided most of the conversation and brainstorming at the community meeting. During the same meeting, Bevill State Community College President, Kim Ennis, emphasized the house’s current state of disrepair, including asbestos removal problems that could damage or even destroy historical documents stored in the attic, and potentially even the house itself. President Ennis highlighted that the home needed more than merely monetary attention. For me, her words seemed to open the floor to an important conversation about the community engagement needed to keep Elliott’s legacy alive in Jasper. Although the house needs professional work and care, there are opportunities for everyday citizens to volunteer their efforts towards maintaining the home, and therefore Elliott’s legacy.

All of the problems affecting the Elliott house and museum could be properly addressed with funding or even grants from historical commissions. However, there is no current Walker County Historical Commission or similar organization. And in the absence of a clear way forward, Bevill State’s leadership is struggling to locate resources to preserve the home of a man that did so much for the city and our state. It is evident that the broader community will have to become engaged to save this home and therefore Elliott’s legacy in Jasper.

The photo of Katie Tindol was taken by Ms. Nicole Smith for the four-piece series on the 2019 Walker County Interns featured in the Daily Mountain Eagle.