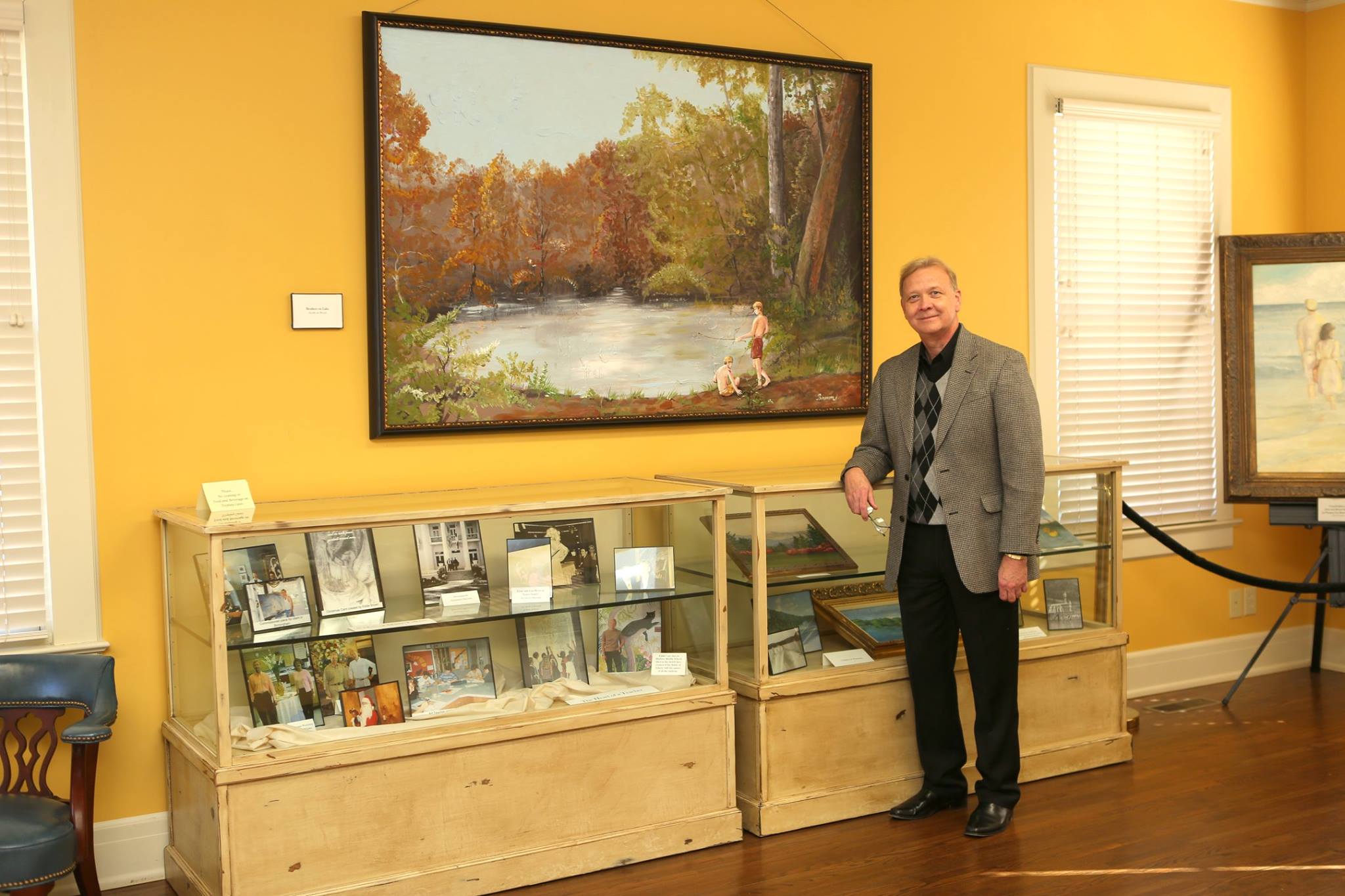 2018 Jean O’Connor-Snyder Intern Currie Blackwell shines a light on identity and belonging in this profile of a creative and civic leader in Walker County.

A warm beam of light enters through the glass parlor door of Five Loaves Bakery in downtown Jasper.  Edward ‘Eddie’ Brown stands under the string lights that hang from the lofty ceiling of this one-room restaurant as he finishes his story. He stops for a moment to take a dramatic pause. A smile gleams across Brown’s face, and the staff and restaurant guests erupt into laughter once more.

Growing up in the heart of rural Alabama, Brown learned from an early age how to captivate an audience in any form. At age 4, his love for the arts flourished as he began sketching, writing and painting scenes from his daily life in Walker County. “To me, art is about taking the normal and making it something magical,” said Brown, “and I think the same goes for my writing as well.”

After finishing his MFA at the University of Alabama, Brown returned to Walker County and was determined to make a difference in his own community. The Jasper native is an award-winning author, artist, actor, director, designer and florist.

He decided to become a teacher for Jasper City Schools during the early 1980s and eventually a professor of studio art at Bevill State. The creative mind in Brown knew he could channel his passion for civic engagement and love for the arts to aid the Jasper community.

“I’ve gotten to interact with so many people in this town and my state because of the work I do. If anything I’ve forced the people in my community, regardless of their belief system, to be comfortable and befriend me for who I am,” said Brown, “and that’s a pretty powerful thing.”

His latest work is the novel, Better Days in Beulah Land.  The novel harkens back to the town Brown calls home and earned him the Best Humor Writing Award in Fiction from the Santa Barbara Writers Conference in California.

Drawing on vignettes from his own childhood, Better Days in Beulah Land weaves the story of two gay brothers, Burton and Cameron Kane, who attempt to reconcile with their identity as they embark on adventures across the state of Alabama and learn to flourish as young artists.

The opening chapter of Beulah describes the two Kane brothers decorating the governor’s mansion in Montgomery for a gala during the early 1960s – an actual moment from Brown’s own career in design and art with brother Gary Brown.

“For me Beulah Land became a cathartic experience. It was like therapy. I got to really reflect on the times from the past… especially as a gay man growing up in a small Southern town,” said Brown.

Being closeted during his youth and growing up in west Alabama meant that Brown’s identity didn’t always feel accepted, but art provided a refuge for him. As a teenager, the artist recalled that he would skip gym class to paint a pep-rally sign just as a defense mechanism to distance himself from homophobic peers.

“A lot of times I see young gay men use their art as a way to cope with the reality that is happening around them,” said Brown, “especially if it’s in the places where they should feel safe.”

Brown explained that schools became a rewarding experience for him. Teaching became a pathway to develop a network of individuals who supported his true identity and also became a rare opportunity to help struggling students find safety in the theater arts.

“Art of any kind allows you to kind of escape from what’s happening around you,” said Brown. “For me, it was writing the book, but for my students sometimes it can be theater.”

Before retiring as a teacher from Jasper City Schools, Brown was the director of the theater program for 35 years. His productions included Oklahoma! the King & I, A Christmas Carol and numerous others.  His performances still continue today as he oversees presentations orchestrated at the Bankhead House.

Going beyond his theater productions, his main goal has always remained the same: helping inspire the students of Jasper.

“Eddie loves working with the kids at the schools doing art projects or theater, and no matter what he does it’s amazing,” said Mimi Hudson, director of community relations at the Walker Area Community Foundation. “They just open up to him and love him.”

Today, Brown continues his work in community productions, his involvement is ever present in the Jasper arts scene, and he remains dedicated to the students of Walker County as an educator at Bevill State.

Based on his numerous roles in both the educational system and community projects, Brown is a town leader who proudly celebrates both his Southern hometown and gay identity.

“I’ve gotten to interact with so many people in this town and my state because of the work I do. If anything I’ve forced the people in my community, regardless of their belief system, to be comfortable and befriend me for who I am,” said Brown, “and that’s a pretty powerful thing.”