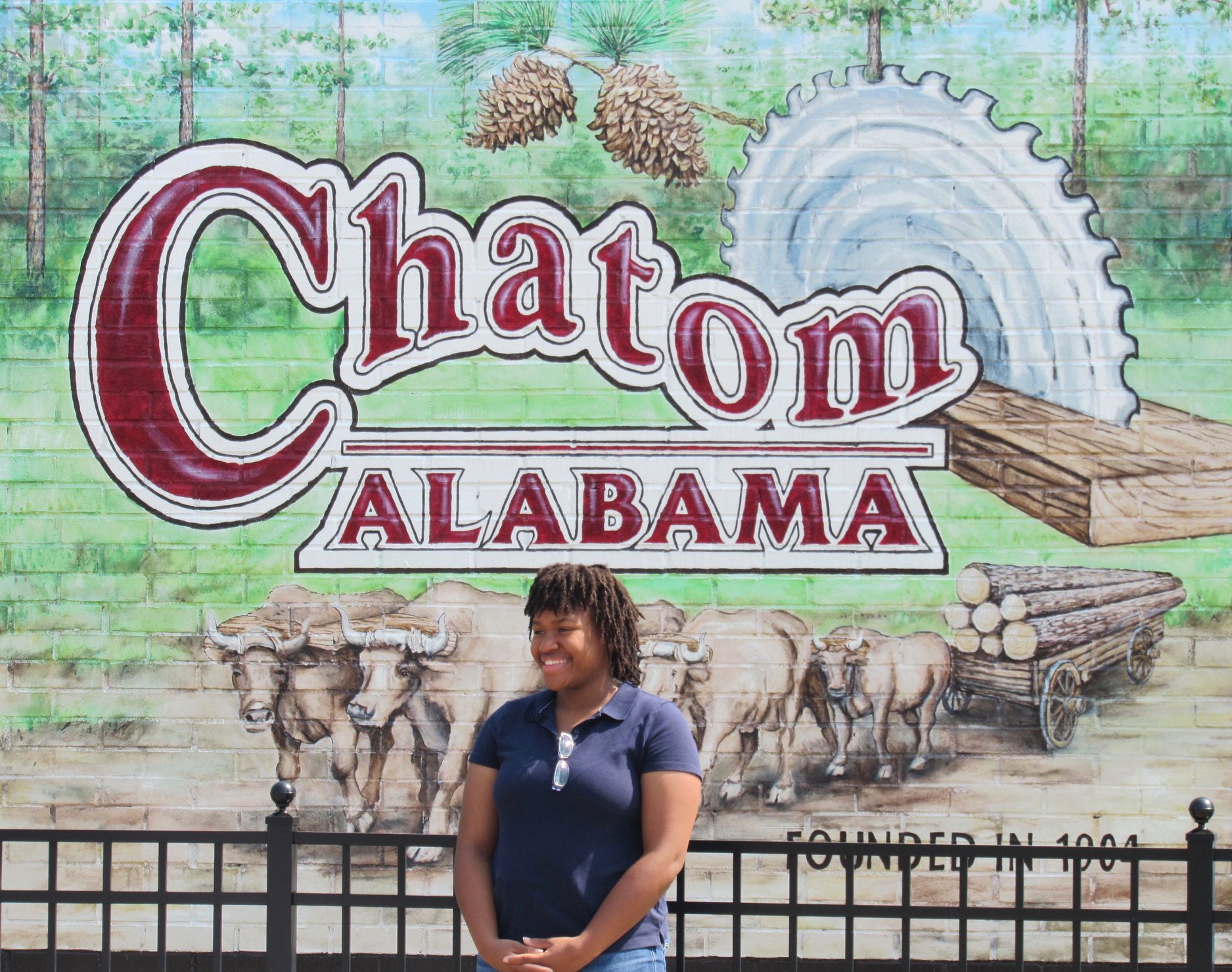 When talking with Inda Lou Schell in Chatom, Alabama, three things become evident: one, community is an essential part of life; two, the sky’s the limit; three, “people [truly] make the difference.”

Schell is a Chatom native who was born in “a farmhouse three miles out of town.” She spent her childhood here, leaving high school to attend the University of Alabama at Tuscaloosa. Before long, she married, started a family and resided in six different towns before her return home in 1966.

Once back home, she dedicated many years engaging with the Chatom community. Her love for people led to many roles at Chatom Baptist Church, including but not limited to teaching Sunday School for women, working with the junior choir, and helping with play productions.

She also played piano, becoming the designated pianist at many weddings and funerals. She said, “I did just about everything at church. The only reason I didn’t preach was that no one asked me.”

Schell’s involvement in church led her to contribute to many great things to the community, strengthen bonds with old friends, and connect with new people. Childhood friend Carrie Mills said, “Lou and I go way back. She is a very talented and precious woman. I enjoy having her as my friend.”

For Schell, there have been a host of people who have made her time in Chatom special. She cherished her late friend and church organist, Regina Thorton, whom she worked with for 48 years.

She loves the group of ladies from Sunday school who collaborate to drive people to the doctor, cook meals for families, support anyone in need, encourage young people and do other work for the church.

She also enjoys spending time with her card playing groups, including a group of retired teachers and another group of widows who keep each other company on Saturdays.

For Schell, her community is one of the best places ever. She is proud of the town’s people and organizations such as the library, nursing home, and school. She explained that growing up in a community like Chatom provides people with support because everyone cares for one another.

One way that support came in Schell’s own life was when friends and family rallied around her when she decided to take an 11-month trip around the country. Years before, Schell came across a book called “America” by Charles Kuralt, a news correspondent for CBS.

Painting of Inda Lou Schell with “America” by Charles Kuralt

In his book, Kuralt discussed his excursions to various cities, sightseeing and meeting new people. Inspired, she gave the book to her husband, and they discussed doing something similar. Sadly, he died in 2004, before they could ever make the trip.

When Schell turned 77, she reread the book and began thinking about taking the trip and visiting Kuralt’s favorite places. Before long she talked it over with her sister, who would become her traveling companion for the first half of the trip.

She then told her four, supportive children that she would be going and spending their inheritance with plans to spend a month in places Kuralt mentioned in his book. She traveled to Louisiana, Florida, South Carolina, North Carolina, New York, Vermont, Maine, Minnesota, Montana, Alaska, and New Mexico. Each step of the way, she was supported by the people who loved her.

After she returned home, Schell decided to co-write and publish her own book, with her sister and travelling companion Janie Gass, about the adventure,  “Revisiting America.”

While in Boothbay Harbor, Maine, she had the opportunity to meet the photographer for Kuralt’s book cover. He took her picture in the exact same spot as he had taken Kuralt’s. This photo became Schell’s book cover.  The connections continued when Mary Lou Teel, who worked with Kuralt as a writer and producer, got the idea of celebrating his birthday by filming and interviewing Schell for a segment that aired on CBS Sunday Morning.

Her journey and book continue to inspire those around her. Friend Rene’ Mills Mead said, “My husband, Patrick, and I were so excited to have Ms. Lou’s book, “Revisiting America,” as the first book on our shelf in our new home. We had our own personal copy with a note from Ms. Lou on the inside. Since receiving her book, we have taken it on all our road trips these past few years.”

Schell’s trip started on Jan. 1, 2011, and ended on Nov. 22, almost a year later. When she returned to Chatom, the community welcomed her home with signs and hugs. One thing she kept saying about her experience was that “people made the difference.”  Sometimes, she revisits the places from her trip across America. She recently returned from a brief journey back to Boothbay Harbor.

After such a phenomenal experience, Schell hoped to take things slow when she returned to Chatom and did not assume all the responsibilities she originally had. She still engages with the people in her community by going to church, joining groups for card games, and being part of events around town.

As she turned 86 this summer, Schell gave credit to God for the people she has met and the places she has been saying, “The Lord takes care of old ladies and crazies, and I’m in both categories.”

Melissa Dennis, a social work major with a minor in community and civic engagement at Auburn University, spent her summer as a 2019 Jean O’Connor-Snyder intern with the AU Living Democracy program working with the Washington County Public Library in Chatom, Alabama.