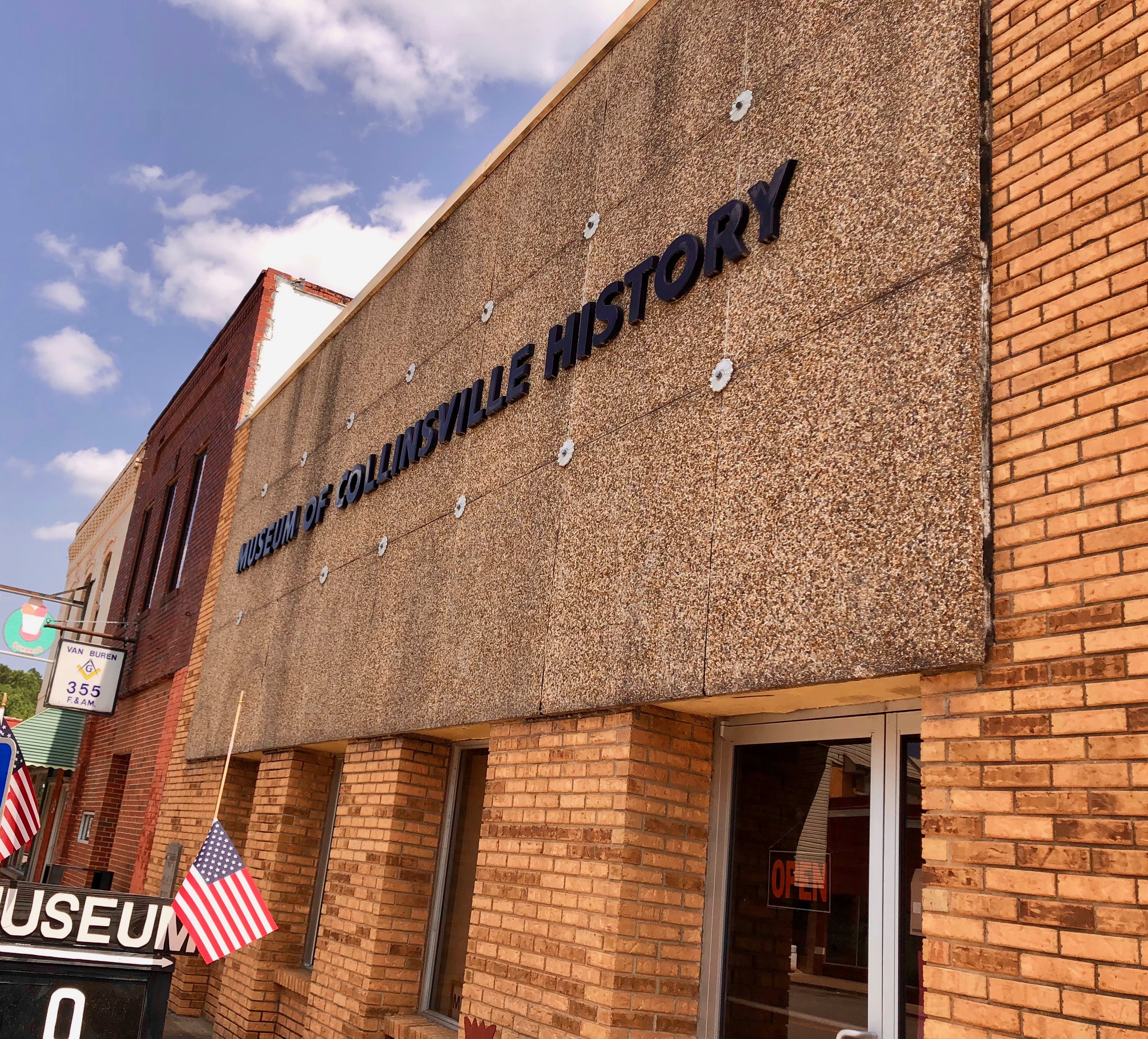 Jean O’Connor-Snyder intern Hannah White reports on The Museum of Collinsville History in her thought piece from Collinsville, Alabama.

Not all small towns can boast of having a museum to showcase their history. But Collinsville can.

The Museum of Collinsville History documents and celebrates the rich history of this community in northeast Alabama. Historic objects donated by countless citizens, ranging from military artifacts to agricultural tools, can be seen by visitors who stop by the museum housed in a former bank on Main Street.

“It’s a very historical town. It was started back in the 1800s and used to be on a stagecoach route from Rome, Georgia, to Huntsville,” said Deborah Redditt, a member of the Collinsville Historical Association who works at the museum.

The museum, established in 2006 by the CHA, moved to its new home in 2015 and continues to grow. The building, along with everything contained in the museum, was donated since the CHA is a nonprofit.

Redditt, a resident of Collinsville since 1977, said she is currently working on cataloguing the inventory of the museum – a daunting task. Since starting this project, she has run into one of the problems the museum consistently faces. “A lot of stuff comes in that doesn’t have dates or names, and it’s hard for us to know where to put it, who brought it, and how to categorize it.”

The museum is also running out of room. The CHA doesn’t turn down donations, so the exhibits can get very crowded. The building next to the museum, a former Masonic Lodge, has been donated to the CHA, providing more space to grow.

The Museum of Collinsville History

Redditt said no firm date for expansion to the new space is set.

Another recent donation by a CHA member provided 33 glass showcases, which will ease the eventual expansion, but what exactly will get moved next door is unclear. “There have been lots of suggestions,” Redditt said.

The museum is home to many unique items, and Redditt can’t pick one favorite. She said, “It’s all representative of what this town is about.”

The museum is home to a 1924 Seth Thomas clock and bell that used to sit on the Cricket Theatre as well as the original marque and two projectors.

Additionally, the museum features an expansive military room that includes letters written during the Civil War. The World War I exhibit has uniforms and shoes worn during that conflict.

The museum is also home to three different bank vaults put to good use.  One houses a research room where visitors can come in and learn more about family members with Collinsville roots.

“People from Louisiana, Virginia, and even in town have come in to research their family members who lived here,” Redditt said.

However, she added, “A lot of people still don’t know it’s here.  They figure Collinsville is a small town, and a small town won’t have a museum.”

But the word is getting out about this growing treasure trove. Redditt said, “It’s a very, very nice place. We are open four days a week, so come visit me.”  The museum is open from 10 a.m. to 3 p.m. on Tuesday and Saturday and from 10 a.m. to 4 p.m. on Wednesday and Thursday.

Hannah White, a junior political science major at Auburn University, spent 10 weeks living and learning in Collinsville, Alabama, as a 2019 Jean O’Connor-Snyder intern with the AU Living Democracy program. She focused on economic development and other community initiatives as she worked with the Collinsville Public Library.