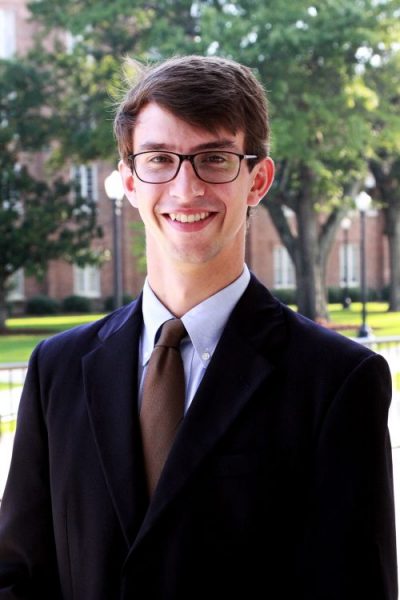 Jeff Rogers, a senior at the University of Alabama, shares his experience of confronting Alabama’s history on campus, and opening himself to the nuance and complexity of community culture on the ground.

“I like to joke that it was a clerical error,” Jeff Rogers says of his nomination for the 2015 Jean O’Connor-Snyder Internship Program (JOIP). “I just received an email out of the blue that said, ‘Jeff, you’ve been nominated’ and we still have no idea who nominated me.”

Although the source of his nomination remains a mystery, whoever suggested Rogers for the internship must have recognized how his interests fit into the JOIP mission. Rogers, who was born and raised in Mountain Brook, Alabama, before attending the University of Alabama, grew up participating in community service, Junior National Youth Leadership Conference, debate team, and the YMCA Youth Legislature.

“It was through these activities that I learned about some of the details, rewards, and frustrations of working in civic and political spheres to serve a community,” Rogers recalled.

According to Rogers, once he learned more about the JOIP internship, the program seemed like an ideal summer opportunity.

“[When] I learned more about it and what opportunities were available in Walker County it was just a perfect fit,” Rogers affirmed. “What attracted me to it was learning more about this state because that was a time in my life when I was really getting interested in Alabama history and contemporary issues.”

According to Rogers, the JOIP internship offered an opportunity to build upon his early experience in civic life by balancing out his major in chemical engineering and minor in history with hands-on experience in community engagement and development.

“My project wasn’t set in stone when I got there but we met with the administrators [of Walker County Center for Technology] on the first day, and they said they needed something to explain to students and parents the different curricula that they offered,” he recalled. “Over the course of the summer, I made 14 different brochures for each course of study that they offered – what certification was available, what education you could get, what internship opportunities were available nearby, and then the salary ranges for those professions when you get out.”

Like many JOIP interns, Rogers described the summer as a “learning process,” and explained that it was a process that expanded upon the civic education he received in grade school.

“The internship helped shift my understanding of civic engagement from focusing on methods of top-down ‘help,’ to identifying community assets and empowering more citizens to affect change.”

Rogers noted that Walker County, his internship location, had an abundance of assets, most notably the local people: “The Walker Area Community Foundation has a great relationship with members of the community. We were lucky enough to live in a house provided by one of those members and it was a great retreat from college life…it really did feel like home after only two months.”

“That was the summer that there was a lot of talk surrounding the Confederate flag and Walker County is one of many nexus points for that conversation in Alabama,” he noted. “So seeing all that play out and juxtaposing the non-academic culture with the ivory-tower culture college life sometimes breeds was refreshing but challenging.”

Rogers continued, “Viewing it all through the frame of The David Mathews Center, [which encourages] focusing on the assets that were present…was a challenge, because when I see a Confederate flag, I am very quick to distance myself from it, but in a community, it’s not that simple.”

“It taught me to embrace differences of all kinds, not just the diversity that gets posterized in promotional brochures.”

Based on his own experience, Rogers advises future JOIP interns to reconsider their concept of inclusion.

“When you go into the community you have to be open to everything. It’s not just going to be an academic enclave, it’s going to be a real community, which includes the good as well as the bad. Having the intention to serve a community–not to fix a community–is a big part of the internship, and something that I learned.”

Rogers continues to embody this philosophy back at the University of Alabama where he serves as the Vice President of the Crimson Chapter of the Southern Poverty Law Center (SPLC) On Campus.

“The President and I share an interest in history, and especially an interest in the symbolism of the Confederacy and other elements of Alabama’s history that are present on campus. One of the planks of the SPLC On Campus is to teach tolerance, and we decided to approach that through the lens of examining problematic symbols on campus that have to do with histories of racism and white supremacy.”

For the Crimson Chapter of SPLC On Campus, this has resulted in a discussion of University buildings named after historical figures associated with segregation and white supremacy. These symbols include Nott Hall, which Rogers noted has long been controversial.

“Our goal has been to break the cycle and somehow get to a point where we can move forward beyond every four years the graduating class pointing out ‘Hey, this guy is pretty bad,’ and then leaving and nothing happening,” he says.

In order to foster this dialogue, Rogers and the chapter have been organizing inclusive, dialogue-based campus events, such as an expert-hosted panel and a month of programming covering the campus’s troubled history, and contemporary representations of that history. According to Rogers, the development of the programming has been greatly influenced by the writings of Dr. David Mathews.

“We’ve been using a lot of the ideas outlined in The Ecology of Democracy by Dr. David Mathews to explore these issues. We don’t want to frame it as, ‘We’re the SPLC On Campus and we know exactly what we need to do,’ but rather ‘We think this is an issue, and a lot of people are interested in it, so let’s talk and do something.’”

Rogers believes that dialogue is a productive way for the student body and administration to engage with each other to address history of the school.

“Ultimately, I have my personal views on whether or not building names should stay up or be removed,” he continues. “But whether they leave it or not, it’s a learning opportunity, and the worst thing we can do is forget the history that surrounds and influences us every day.”

Long-term, Rogers wants to keep engaging communities around important issues, and eventually would like to work developing policies that help strengthen communities.

“It’s so easy to create echo chambers for ourselves today. I want to help foster communication between people who might disagree on things, but still have to live together. I think that would benefit everybody.”