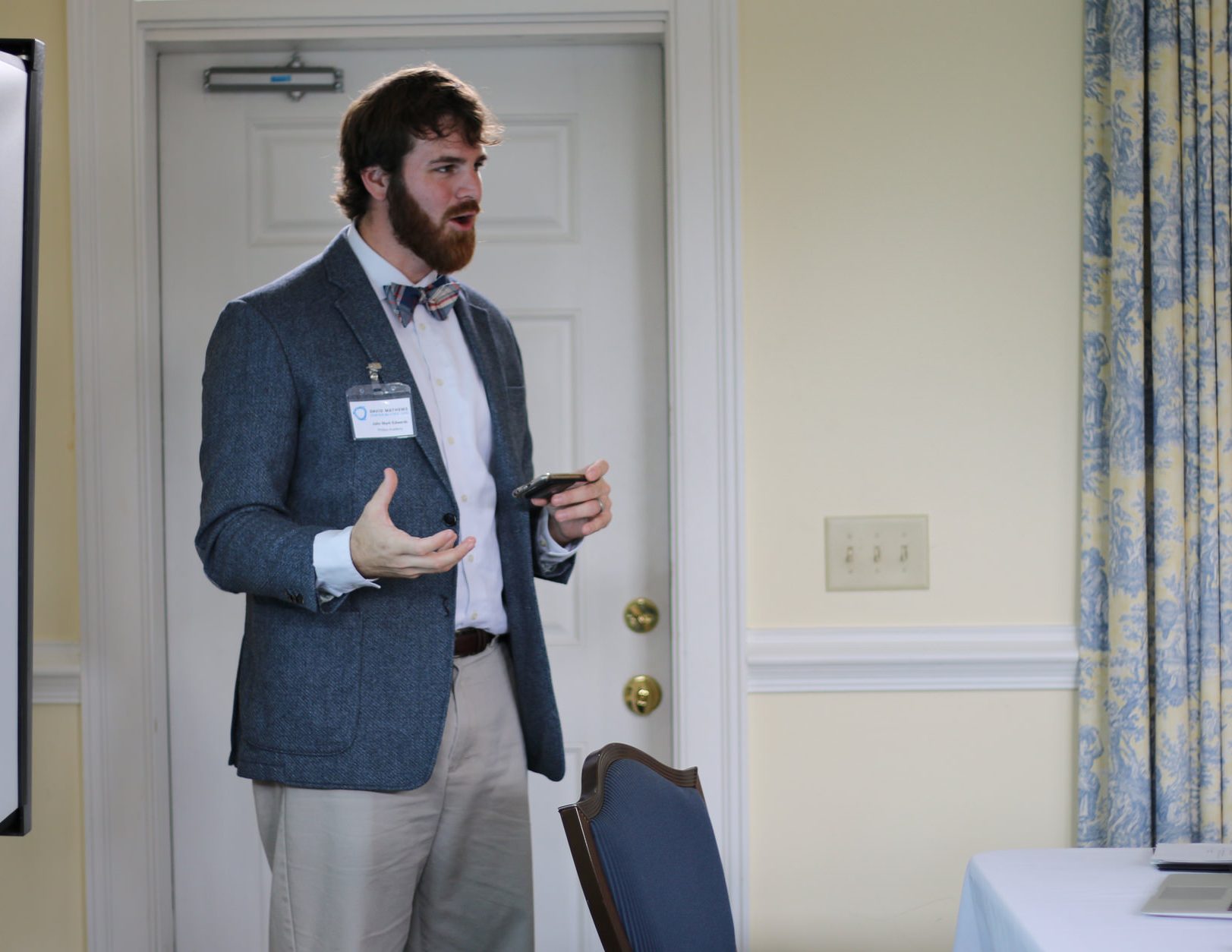 JohnMark Edwards teaches Eighth Grade Social Studies at John Herbert Phillips Academy in Birmingham, Alabama. He is a passionate advocate of deliberation and a regular attendee and supporter of Teachers’ Institute, a workshop designed to equip teachers to be effective moderators and enhance civic learning through classroom deliberation. Mathews Center staff had the opportunity to sit down with JohnMark at Phillips Academy and discuss his experiences since he began his deliberative journey in 2010. Below are some key details from the interview that we hope will inspire you.

What led JohnMark to become such an avid believer in classroom deliberation? “I was introduced to deliberation by Peggy Sparks. She came to me and said this was something I should try. I respected her a lot and her advice,” Edwards began, seated on a plush red sofa sitting along the edge of the room.  The sofa and the Time Magazine covers plastered to the wall just above it paid tribute to the teacher’s avid interest in human affairs; as did his ready smile and expressive hands.

Edwards did not know what to expect when he arrived at the American Village in 2010 to attend his first Teachers’ Institute. At the workshop everyone sat down in chairs arranged in a circle, and they commenced  with the forum first, details after. Teachers had the opportunity to experience the deliberative forum for themselves, then staff explained deliberation steps and strategies, and teachers who had used deliberation in their classrooms shared their successes and challenges. Edwards said, “I was shocked to find that there was this teaching with deliberation philosophy I had somehow totally missed.”

“It was what I needed and what I was missing from my classroom. It was really what I was searching for.”

Deliberation in the Classroom

JohnMark immediately took what he learned and started “tinkering” with it and applying it with his students. Finding ways to initially integrate deliberation can be challenging,  “especially if you are teaching in a school district or a school that really has every day mapped out for you,” Edwards explained. “You really have to get buy-in from your principal to allow you to take time, because it does take time to do these things, and it can be difficult sometimes to include all the content that you need.”

The benefits are manifold, however, and worth the investment. “When you’re thinking about critical thinking skills, problem-solving skills, collaboration skills, these things that are important to any social studies classroom, you’re going to hit them when you’re going through a deliberation process.”

Some teachers opt to use National Issues Forums (NIF) issue guides with their students, but deliberation can be incorporated into a classroom in a variety of ways. For instance, since 2010 JohnMark has developed his own forums. After studying a unit on early world religion, JohnMark and his class deliberated on the role of religion in public school. He did not have or create a booklet, but making the issue contemporary and talking through the varying perspectives of different groups around the county was enough to make the forum a huge success.

“If you’re not a social studies teacher, I think there’s lots of room for deliberation in any class. Deliberation to me supersedes any content. It’s not content specific.”

JohnMark had a few tips for teachers interested in deliberative learning and engagement. First, attend Teachers’ Institute. “Not only do you learn how to deliberate, but you have this automatic default network of teachers who already do deliberation, plus teachers who are at the same place you are, considering deliberation.”

Second, “do not underestimate the preparation component.”  Have a list of questions for when conversation sags. “As the moderator, that’s your time to shine. You come out with the new question. If it’s not catching, go to the next question.  And preparing yourself for the actual forum day is super important, both for you and for your students.”

Third,  “make forums a big deal.” Do it somewhere other than your classroom…Invite parents to see. Invite your principal to see. Students like that kind of attention. It also makes [students say], ‘Whoa! We’re going to do a forum. Let’s get ready. Let’s prepare for this!’ And once it’s a thing in your classroom that’s exciting, they’ll want to do it. They’ll want to come back and moderate for younger students. They’ll want other students to do it. If you make it a big deal, they’ll think it’s a big deal.”

There are several challenges to bringing deliberation to the classroom, according to Edwards. “The biggest one for most teachers that I talk to that do this deliberation, as well as myself, is that as a teacher, you have a certain amount of authority in the classroom, and to do a forum, to do deliberation, you have to give up that authority…So real deliberation is letting the deliberation guide the forum… and as a facilitator, all you’re doing is making sure you’re calling on people and things like that, but you’re moderating. That’s it. You’re not even really leading.”

“That can be hard for a lot of teachers that are not used to or haven’t really tried a lot of that in the past, and a lot of times it can be discouraging when you don’t feel like the outcome was what you wanted the outcome to be.”

“I’ve seen teachers try to do deliberation without giving up authority, and then reflecting on it and being totally confused as to, they thought they had a good product, but really it was just them sharing their personal opinions with the class, which of course is not deliberation.”

An additional challenge would be class size, as opposed to numbers that are more suited for deliberation. “I think ideally I would want 12-14 students, but it’s unrealistic in the state of Alabama in a public school as far as I know…which presents the challenge of ‘ok, you can only talk three times and everyone needs to talk at least once.’”

JohnMark has used several different strategies to address this challenge. “I’ve tried lots of different things, and I’m not done experimenting by any stretch of the imagination. One thing that I have found works pretty well is doing equity sticks. I’ve used poker chips. Each student has three. If you run out of your three, you’re done. You’re done talking,” Edwards said. “I can scan the room and quickly see who has not yet had a turn, especially if we’re getting toward the end, and I can just call on them, which is another strategy.”

The Impact of Classroom Deliberation

JohnMark is part of a nation-wide team of educators who travel to the Kettering Foundation semiannually. Their goal is to track data that show the positive benefits of deliberation for students.

“As a teacher who loves deliberation, it’s easy for me to cite and give you anecdotal evidence. There are things that my students say after they’ve had forums like, ‘I respectfully disagree with you.’ For middle schoolers, ‘if there is conflict, that’s always a bad thing. If someone disagrees with you, they are bad, or it is bad,’ but the deliberation changes [that].”

Deliberation moves discussion to a more mature level of understanding and engagement, to an attitude of, “we’re going to respectfully disagree with one another and learn from one another, and we’re all working together to solve the problem.”

Additionally, students learn to back up their ideas with facts and clear logic. “Because in a forum, if you just start spouting off things that you’re just pulling out of your mind, you get shut down really quickly.”  Kids stop using superlatives and hyperbole to express their opinions.

JohnMark has even noticed benefits that go beyond his classroom; he has seen “changes in how they talk to each other about problems or conflict totally irrelevant to my class.”

“I even have kids tell me they tried to use deliberation to get a puppy from their parents,” Edwards laughed. “Parents tell me all the time when their kids do deliberation, because they think it’s hilarious!”

“Those stories happen on a regular basis, and so I know these forums are having a positive impact on more than just school, but…in life.”

“I can’t even figure out how I would even take it away from my classroom today.”