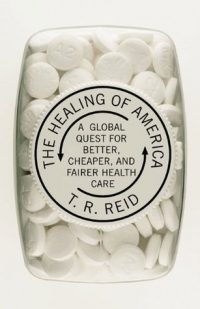 Students, faculty, and community members gathered on the evening of February 27, 2012 in the University of Alabama’s Biology building for a keynote address delivered by T.R. Reid, reporter, author, and documentary filmmaker. The event, co-sponsored by the Mathews Center and New College, engaged the topic of disparities in health care.

Reid’s newest book, The Healing of America: A Global Quest for Better, Cheaper, and Fairer Health Care, examines the health care systems of other wealthy nations in hopes of providing an impetus for improving the system of health care in the United States. PBS Frontline followed Reid on his trek through numerous countries while reporting for The Healing of America. The footage was compiled into two documentary films, Sick Around the World and India—A Second Opinion.

Reid opened his remarks by congratulating the Crimson Tide on their football national championship victory, expressing his pleasure at escaping the wintry weather of his Colorado home, and urging the Tuscaloosa community to quickly rebuild his favorite barbecue place that was destroyed by the April 2011 tornados.

After Reid’s lighthearted opening sentences that elicited laughs from the audience, he delved into a sprint through the high points of his book, The Healing of America.

“49.9 million Americans do not have health care coverage,” and “22,000 Americans die a year” of treatable illnesses, related Reid. These stark numbers led Reid to ask three questions about health care systems in affluent countries around the world. First, “How do you cover everybody [as many wealthy countries do], and spend less, and how can we do it?” Second, “Why would a country commit to provide health care for all of its people?” And finally, “Why does the richest country in the world not cover all of its citizens?”

Reid answers these questions in his book by examining the four major categories of health care systems and the nations that fall in each. In the spirit of “a reporter” and “not an editorialist,” Reid related that he would not advocate or champion a particular system, but rather relate how and why they work.

The four systems are: The Beveridge Model, The Bismarck Model, the National Health Insurance Model (also known as the Douglas Model), and the Out-of-pocket Model. The Beveridge Model originated in Great Britain at the end of the Second World War; in it government owns the hospitals and labs, employs the specialists, and general practitioners bill the government. There are no premiums, co-pays, or doctor bills. The Bismarck Model was created in the recently-unified Germany of the 1870s by Chancellor Otto von Bismarck. In the Bismarck Model, doctors, hospitals, and insurance are all private, every citizen is required to buy insurance and split the cost with their employer, and the government picks up the cost if one becomes unemployed. The National Insurance Model came into being in Canada in the mid-twentieth century and it employs private doctors, private (or charity) hospitals, and the government pays the bill. The Out-of-pocket Model is self-explanatory and exists in three quarters of the world.

Reid put forth that the United States makes use of all four models. The Beveridge Model applies to the Veteran’s Affairs health care system, the Bismarck Model encompasses all Americans who share payment for insurance with their employer (about 150 million), the National Health Insurance Model covers all Americans over 65 on Medicare, and the Out-of-pocket Model accounts for the 49.9 million Americans lacking health insurance.

Though cautioning his listeners that he did not find a perfect system in all his travels, Reid nevertheless moved out of the objective reporting that comprised most of his address and exhorted the audience to make the moral commitment to provide “the same access, to the same care, at the same price” for all Americans. Upon conclusion of his remarks, Reid answered audience questions, signed books, and personably chatted with community members for quite some time.

T.R. Reid’s keynote intersected with the Mathews Center’s goal to work with communities on issues that concern them by providing an opportunity for interested Alabamians to further engage with a national issue. Mathews Center interns at UA are currently employed in framing an issue guide related to health care in Alabama.

The Mathews Center would like to thank T.R. Reid for coming to Alabama to discuss an issue that many Alabamians express concern over.